Common Threads in World Religions: The Ethic of Reciprocity

“God has made different religions to suit different aspirations, times, and countries.
All doctrines are only so many paths; but a path is by no means God Himself.
Indeed, one can reach God if one follows any of the paths with wholehearted devotion.”
(Ramakrishna) 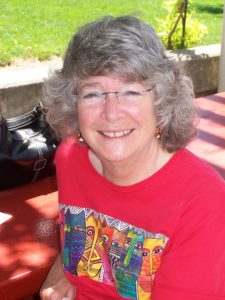 Where do these ideas come from, and why are they received at the same time by different people?

It is not a huge leap to consider that the knowledge, the idea, existed, and the separate parties tuned into it at the same time, expressing it differently according to their own frames of reference and experience.

This process also applies to our faith traditions. Ramakrishna, a 19th-century Hindu saint, speaks of this:

“As one can ascend to the top of a house by means of a ladder or a bamboo or a staircase or a rope, so diverse are the ways and means to approach God, and every religion in the world shows one of these ways.   …  “People partition off their lands by means of boundaries, but no one can partition off the all-embracing sky overhead. The indivisible sky surrounds all and includes all.  …  When a heart is illumined by true knowledge, it knows that above all these wars of sects and sectarians presides the one indivisible, eternal, all-knowing bliss.”  (1)

In our own age, we have Matthew Fox, a former Dominican priest who not very jokingly says he is the only person to have received a pink slip from the world’s largest multinational corporation, the Roman Catholic Church, because of his vocal belief in the universality of the Creation God. In One River, Many Wells, Fox quotes the Christian mystic Meister Eckhart: “Divinity is an underground river that no one can stop and no one can dam up.” (2) 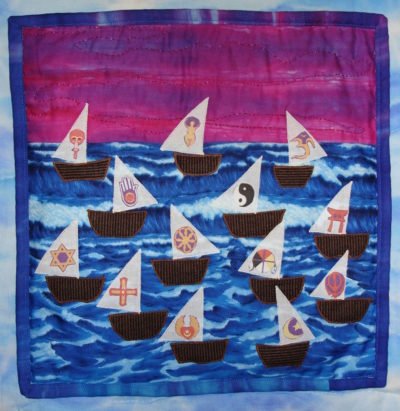 Fox elaborates: “There is one underground river—but there are many wells into that river: an African well, a Taoist well, a Buddhist well, a Jewish well, a Muslim well, a goddess well, a Christian well, and aboriginal wells. … To go down a well is to practice a tradition, but we would make a grave mistake (an idolatrous one) if we confused the well itself with the flowing waters of the underground river.” (3)

Fox also shared a story of Father Bede Griffiths, a Benedictine monk who lived for over half a century in India running an ashram for Christians and Hindus. Fr. Griffiths offered another metaphor: “Look at your fingers. If you look at their top side, you see five distinct entities, each waving in the breeze. But if you follow them down to their origin, they all merge in the palm of the hand. So, too, with our religions. If we just look at their top side, they appear distinct and independent and autonomous. But if you look at their source, they all come from the same center.” (4)

The Dalai Lama said, “Every religion emphasizes human improvement, love, respect for others, sharing other people’s suffering. On these lines every religion has more or less the same viewpoint and the same goal.” (5)

Reflecting the core similarities of the world religions, in spite of the different names they have for the One God and the different forms of worship, consider a core tenet common to all: the Ethic of Reciprocity. We know it as the Golden Rule.

In the Christian Bible and the Tanakh of Judaism, Leviticus (6) stressed providing hospitality for strangers, reminding the Hebrews that they, too, were once strangers in a foreign land. The passage from 1 Corinthians (7) in the Christian Bible reminds us that there are many kinds of gifts, received in different measure. The gospel of Matthew (8) states the principle that we have come to know as the Golden Rule. This principle also appears in Luke, where it is followed by the parable of the Good Samaritan. (9)

These illustrate the principle of positive action—not just to refrain from harming others, but to do for others as we would want done to us. This principle applies not just to one’s friends, family and neighbors, but to all. It is a foundation of peace and social justice.

The Ethic of Reciprocity is older than we can know. In an early written expression, an Egyptian papyrus from the Late Period (c. 1080-332 BCE) records, “that which you hate to be done to you, do not do to another.” (10)

The Golden Rule was often expressed in ancient Greek philosophy. Sextus the Pythagorean said, “What you wish your neighbors to be to you, such be also to them.” (11)

Among the “People of the Book,” the descendants of Abraham, Judaism’s version is, “What is hateful to you, do not do to your neighbor.  This is the whole Torah; all the rest is commentary.” (12)

In Islam’s teachings the Prophet Muhammad stated, “Not one of you truly believes until you wish for others what you wish for yourself.” (13)

Zoroastrianism, which the Hebrews encountered during the Babylonian exile, instructs “Do not do unto others whatever is injurious to yourself.” (14)

Among the Eastern faith traditions,Hinduism teaches: “This is the sum of duty: do not do to others what would cause pain if done to you.” (15)

Sikhism, which grew out of Hinduism, teaches, “I am a stranger to no one; and no one is a stranger to me. Indeed I am a friend to all.” (16)

Buddhism, originally a practice rather than a religion, teaches, “Treat not others in ways that you yourself would find hurtful.” (17)

Confucianism, a Chinese ethical tradition, says, “One word which sums up the basis of all good conduct: … loving kindness. Do not do to others what you do not want done to yourself.” (18)

While it is implied in most faith traditions, some specifically state that this principle is extended to all creation, not just to human beings.


Unitarianism, which branched out of Christianity, stresses this universality by teaching, “We affirm and promote respect for the interdependent web of all existence of which we are a part.” (20)

And Native American spirituality teaches, “We are as much alive as we keep the earth alive.” (21)  “Respect for all life is the foundation”—this is the Great Law of Peace.

The Ethic of Reciprocity is one common thread among the world religions. (There are others, although these are topics for another time). This core commonality is a clue to the mystery of Truth.

We can look out through the windows of a house and see different views of the gardens around it. We also can look into the house through those windows and see the same interior, from different perspectives. Thus each of the world religions has a window into Truth, as it is viewed from that part of the garden.

Religious practices are cultural expressions that grew to meet the needs of a people in a time and place. The presence of part of the same Truth in each of these world religions, even when viewed from different perspectives, tells us there is a common ground upon which mutual respect and social justice can be built.

“There are many paths up the mountain, but the view of the moon from the top is the same.” (22)  I believe that one can reach the Truth by following any of these paths—wholeheartedly, as Ramakrishna invited. (23)

Adapted from a sermon given at First United Methodist Church, Hayward, CA, 10/10/09.

(1)  Ramakrishna, quoted by Huston Smith in The Illustrated World’s Religions: A Guide to Our Wisdom Traditions, p. 56.

(5) Attributed to the Dalai Lama; cited in Wikipedia: Ethic of Reciprocity and many other related sites; exact source and date not cited.

(22)  Variations of this expression are common in the interfaith realm. This version is quoted as an “Ancient Japanese saying” at www.religioustolerance.org/quotes5.htm.

(23) See www.scarboromissions.ca/Golden_rule/index.php for Golden Rule resources, including a Golden Rule poster which can be ordered. Some of the above quotes are drawn from this poster.