My son is a Shambhala meditation practitioner. Recently he, his wife and their 9-year-old daughter invited me to join them for a week at the Shambhala Mountain Center in Colorado. 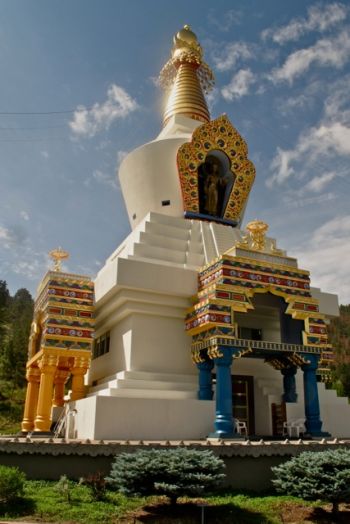 Located on 650 acres of sacred land, the Center is dedicated to nourishing the Shambhala spirit. Shambhala is a form of Tibetan Buddhist practice. Its teachings begin with, “Do not be afraid of who you are! Tell the truth about yourself and communicate openly.”

The center’s Great Stupa (1) is a striking sight. It invites meditative walks as well as meaningful rituals. I felt a huge sense of awe and reverence for this monument, as worthy as any cathedral I have seen.

Shambhala has a family camp program called Rites of Passage, for ages 8 – 10.  The children are taught to take more responsibility for their emotions as well as their actions by becoming young warriors.  They use the term “warrior” in the sense of its Tibetan meaning: “one who is brave.” Bravery refers to promoting human goodness, making the enlightened society possible.

Moving in this direction requires time to form new habits of body and mind. One of the most valuable habits we learned to cultivate is meditation. Meditation is all about practice.  First things first: I needed to learn to sit on the cushion. Fortunately, I was given permission to stack several cushions to make this possible.

Here goes… Breathe in, breathe out. … Sit up … no slouching … look straight ahead … let your mind settle. A worrisome thought comes in …  let it out on the nextexhalation.  Once I let go of concerns and judgments about “doing meditation right,” I was able to settle into peaceful presence.

The children shared an experiment that symbolizes the busy mind:  “Fill a large jar with water, then drop some colorful glitter into the jar and shake.  See the glitter jumping all around?  That’s what happens in your mind when it is filled with emotions, worries, and troublesome thoughts.”

Setting the jar to the side, we resumed meditation.  After several minutes we were invited to look again at the jar.  The glitter had settled and the water had cleared.  “This is why we do meditation—to let our minds settle.  Now our mind is clear to face what had seemed worrisome!”

All week I was constantly learning alongside my granddaughter and the other young Shambhala warriors. Walking the mile-long path of the Stupa as the week came to a close, I felt deeply connected to the goodness of all creation.

When you have the opportunity, stand and face the rising of the Great Eastern Sun. It is a powerful symbol and a reminder of the dawn of human dignity and goodness in ourselves and others.

(1) His Holiness the Fourteenth Dalai Lama, spiritual leader of Tibetan Buddhists, explains:  “It has long been the tradition that wherever the teachings of the Buddhas have been revered and practiced, communities of followers have built reliquary monuments known in Sanskrit as stupas and as chörtens in Tibetan. And wherever they have been built, they have been regarded as sacred, for like religious images and scriptures, they represent aspects of enlightenment.”   (http://www.shambhalamountain.org/great-stupa/)