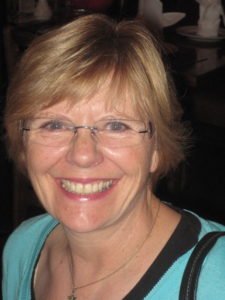 I have an icon on my altar, a copy of the one that hangs in the front entrance of the chapel at the Big Sur Hermitage, near where I used to live. This icon sits on my altar because it makes me think of all the comfort and feeling of home I experience when I am at the Hermitage, where I see icons everywhere. Yet I have known very little about them. When this month’s opportunity came up to do a sermon about Eastern Orthodox Icons came up, it gave me the chance to explore more.

During my stay at the Hermitage over Christmas, I found two books about icons that sparked my interest. The word ‘icon’ means ‘image’. Icons conveyed information about a particular person or event through the use of color and symbols. The Apostle Luke was the first painter of icons. In that day and age, around 70 AD, few people outside of scholars and monks were able to read or write. To those who could not read, icons made it possible to convey religious messages visually.

During the 8th and 9th century, many Orthodox iconographers were imprisoned, tortured and mutilated. Byzantine Emperor Leo III ordered the churches’ icons to be removed and destroyed, thinking that they represented idols or objects of worship. Yet the Orthodox did not see icons in this way. They were used a focus point of prayer. They were intended to portray grace and truth.

In the 14th through 16th centuries,  icon-making experienced a resurgence. In 1425, St. Andrei Rublev painted “The Holy Trinity,” the icon that I keep on my altar. I used to believe that this depicted three feminine figures communing comfortably together on an outside patio (I giggle as I admit this). I thought it was cool that the monks had chosen a feminine image to hang in the chapel foyer. However, upon doing a bit of research, I learned that these are not female images at all, but a depiction of the Father, Son and Holy Spirit. (1)

I marvel at synchronicity in my life. At a birthday party that I was invited to, Shelli, the hostess of the party,  just “happened” to be an iconographer! Shelli took me into her studio for a lesson in icon making.

Icon painting is a form of prayer, a communion and collaboration with God as the guide. Icons are a path of sacred prayer and contemplation. People have risked their lives in the making of these sacred works. The icon is the outgrowth of a living relationship with God, prayer, fasting and meditation. 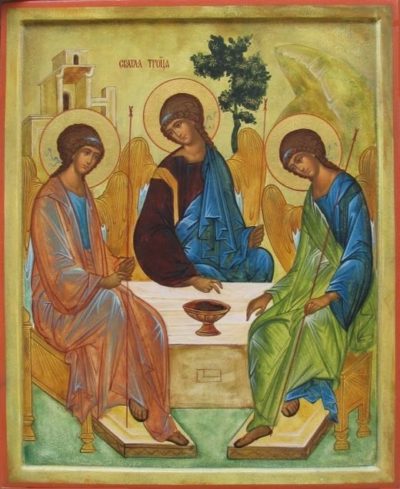 Most icons are painted on wood panel. The wood symbolizes the wood from the Ark of the Covenant or the Ark—sacred wood. Linen or cheese cloth is glued to the wood as a foundation for the 5 to 10 layers of black gesso. The painting comes out of the darkness (black gesso) and into the light. This preparing of the surface takes at least a week. It is then lightly sandpapered and the iconographer is ready to use tracing paper to draw the preliminary picture.

Next comes the gold leafing, and finally fine vibrant colors made from minerals are mixed with egg yolk. These egg temperas have very little oxygen in them, which allows the colors to resist fading when exposed to chemicals or sunlight over a long period of time.  This iconographer lets the paint dry for about 6 months before the final varnish is applied.

After the completion of the image, the icon is to be blessed. It is kept on the altar table in the sanctuary from Vespers until after Liturgy the next day, and is formally blessed by the priest with the owner present. Process complete!

Icons are to be used as an aid to worship and to be placed in an area of prayer. Jim Forest, in his book, Praying with Icons (2) quotes Father Zinon an icon painter and monk of the Monastery of the Caves, near Pskov, Russia:  “They are a reflection that God became man. They are holy doors. To make an icon is the fulfillment of prayer. One feels the Holy Spirit as they work.”

Icons are alive with the prayers and meditations they were made with. As Forest says, “It (the icon) isn’t the painter’s own work. It is from heaven.”

Icons are silent. The figures in an icon do not have their mouths open as if to speak. The silence, however, is pregnant. The silence and stillness of the icon invites prayer.

Icons are not signed. There is no self-glory for the artist who produces an icon. It is a gift from God.

I must say that I have learned a tremendous amount about icons during this month’s studies. I also know I have barely begun to scratch the surface of this rich artistic form of prayer.

(1) More about the making of the “The Holy Trinity” icon, from http://tars.rollins.edu/Foreign_Lang/Russian/trinity.html: “Trying to portray the Trinity, but always aware of the Biblical prohibition against depicting God, icon painters turned to the story of the hospitality of Abraham who was visited by three wanderers. In their compositions, icon painters included many details—the figures of Abraham and Sarah, a servant killing a calf in preparation for the feast, the rock, the tree of Mamre, and the house (tent)—trying to render as faithfully as possible the events described in the text (KJV, Genesis, 18: 1-8). … Very few artists before Rublev dared to eliminate all the narrative elements from the story, leaving only the three angels. Rublev was the first to make a conscious decision not to include in his composition the figures of Abraham and Sarah, because he did not set out to illustrate the story of the hospitality of Abraham, as did many painters before him, but to convey through his image the idea of the unity and indivisibility of the three persons of the Trinity.”